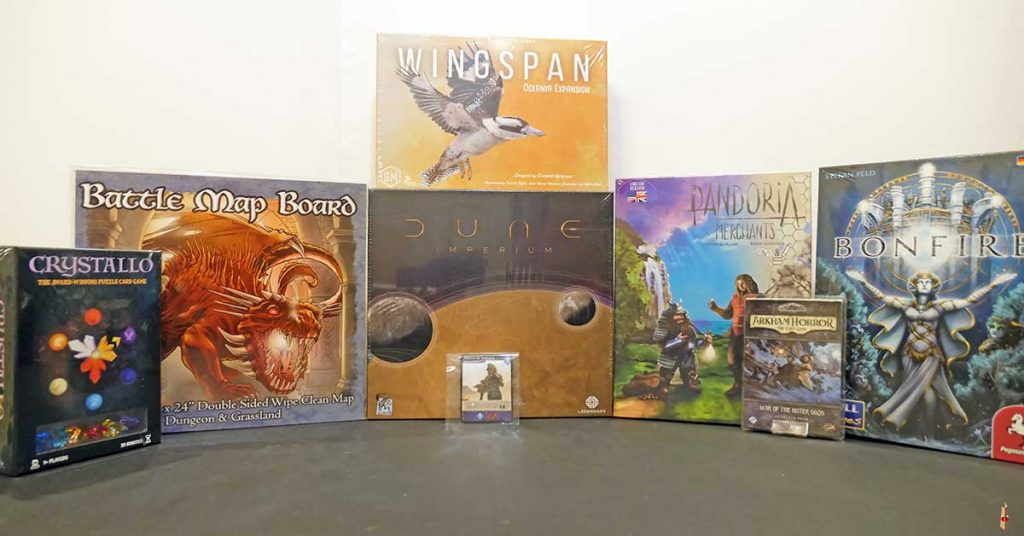 We received another big order this week, albeit a bit late, with seven preordered titles at once. Oh, there's a whole slew of new stuff besides that, and we've officially gone all in on those Battle Mats from Loke. Some great restocks back on the shelves and upcoming Pathfinder in preorders. We also have some nice mini-expansions for Cartographers we're giving away for free.

So, as a bit of an introduction, it'll generally be Eric writing these, and in our weekly store update I'll provide some points of interest we've gone through during the week in the wonderous business of games. If you're not interested in all that blah blah blah you can just skip to the very bottom and see what Restocks, New Products, and Preorders we've added during the week. For those interested in some shop talk, come on in, take your hat and jacket off, grab a warm beverage and a seat, and read on.

As you may recall from last week's update, we had played Cartographers with Thunderworks Games, and this week we received our reward in numerous copies of two mini-expansions. There's the Skills Mini-Expansion (MSRP $7.00) and Ambush Mini-Expansion (MSRP $4.00). So, we will be giving one of each mini-expansion away with every copy of Cartographers we sell while they last. Not too shabby, huh? Cartographers is a great little puzzler, and has a really nice solo mode.

Most of the week was business as usual until Friday. We had everything prepped to receive and push out our large shipment of preorders. I'll tell you, it's a whole production. There's oodles of packing material and boxes, shipping tape like streamers, preparation stations based on outgoing orders, folks checking invoices and with me double checking... you know, a bit like another operation closer to the North Pole... but I digress. In any case, we have become very adept at turning around preorder arrivals into order shipments, and many times in the same day. Of course UPS or USPS may then let us down once they have the package with slow service, but we do our very best getting it into their hands.

Wouldn't you know it though, we received a shipping update from UPS on Friday morning pushing delivery until Monday. Such unfortunate timing! So, I released the extra help with instructions to return on Monday and we went back to business as usual. Then Saturday rolls around and I hear the UPS truck backing in... they're making a Saturday delivery?! Hasn't happened before, but why not? We were caught flat footed, and it arrived so late we couldn't turn anything around on the same day. However, I called in the reinforcements and we did get everything packed up on Saturday so we can have it heading out that much earlier on Monday. I'm just a little sad that the games might not make it by Christmas. That single day the shipment slipped! I'll tell you, that's the stuff I dwell on.

In any case, below are the Restocks, New Items, and Preorders added to the shop last week. You can click on the item to learn more, many of the products have review and gameplay videos so you can see the game in action. If you're visiting and you'd like to keep up with our giveaways, sales, new products, and articles like this one just create an account here. Once created you will be subscribed to our newsletter and become enrolled in our loyalty system, instantly earning 50 Stones that you can use on your very first order. A Stone? One Stone is equivalent to One Cent. That doesn't sound like much, but you earn 2 Stones for every dollar spent and 5 for each product review, so though it may seem small, those savings add up fast! Redeem your Stones upon checkout, and they can save you up to 10% off your cart total. Loyalty Matters!