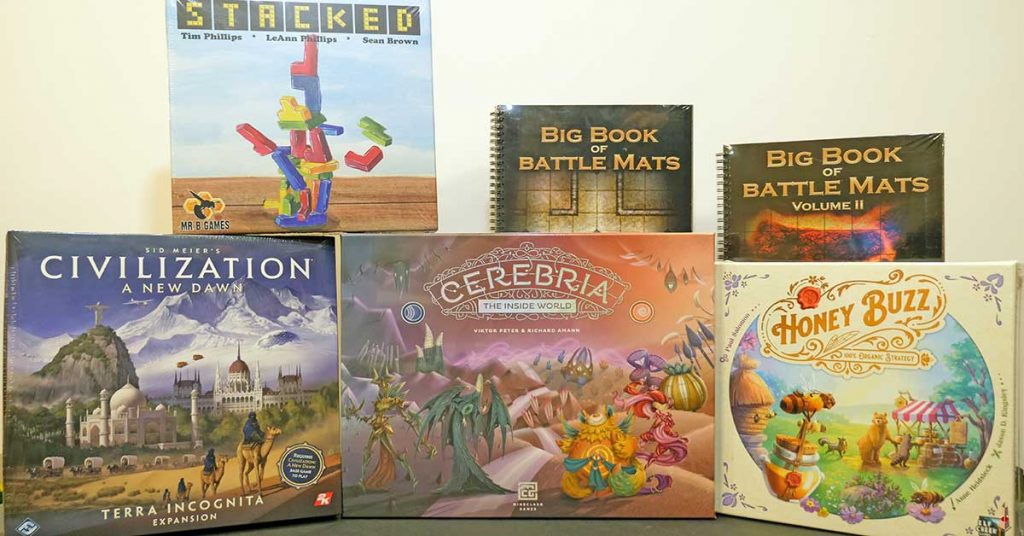 We've added a few new releases, like the family dexterity game Stacked, and some games that have been around for a bit like Cerebria where players shape an evolving personality. Like most of our games, these have a great solo player option. The preorders have started popping up again, so we've added a few. However, the conversation this week is on our late preorders and shipping in general.

We don't know for sure, but gossip around the water cooler is blaming slow shipments between a few publishers and our primary distributor caused by a combination of holiday hours, COVID, and staffing. This has impacted our Lord of the Rings Card Game, Arkham Horror Card Game, Twilight Imperium: Prophecy of Kings, and Lost Ruins of Arnak preorders. If you have one of those titles preordered with us, just hang on! We're almost there!

We pride ourselves on getting your games and products packaged well, and out the door quickly. Unfortunately, that's the last bit of control we have over the package. Once it's with either the USPS or UPS we're kind of along for the ride too. However, we do see and track a lot of packages, so let's give you a quick rundown on how things are going.

UPS has been fantastic, and there has only been one temporarily misdelivered package this year which found its way home a few hours later. UPS Ground is sometimes seemingly slow, but once it's on its way to you, the delivery date is usually solid. People have asked us why UPS and not the more inexpensive Fed Ex, and all I'll say is we'll never use Fed Ex again. Sometimes cheaper is not always better.

When it comes to USPS, it has been slower than ever. Numerous packages are taking way, way longer than they should. Strangely, it's not slow to everyone or to everywhere, it ebbs and flows with seemingly no rhyme or reason, at least any that we can sort out. I wish there were something we could do to speed things up! However, I can say that USPS has not lost anything this year, which is kind of remarkable. Slow? Sometimes, but they do get it done. We have learned that as long as your tracking number comes back with a 'in transit' status, you're going to be okay. Of course, if you see your status not moving for seven days you can ping the post office or email us to do it for you, that's something that often times gets things moving again.

We will continually do our best to get the package into the hands of the shipper, and they are doing their best to get items to you. With staffing shortages, COVID, and the holiday mail influx things are a bit slow, but they are moving. Remember that if you want something delivered by Christmas, the deadline for most standard packages is 15 December...right around the corner!

Until I can figure out the last few nuances in my teleportation device, we're going to have to rely on the mail and UPS to get your games from us to you. Generally things work well, albeit slowly at times. When there is a bit of a rough patch know that we are there to help. As I mentioned before, there's not a lot we can do, but opening an investigation or inquiring about a package is well within the ways we can help you out, so don't hesitate to reach out. We're happy to help! In any case, listed below are the Restocks, New Items, and Preorders added to the shop last week. You can click on the item to learn more, many of the products have review and gameplay videos so you can see the game in action. Also, if you'd like to keep up with our giveaways, sales, new products, and articles just create an account. You'll also be enrolled in our loyalty system!