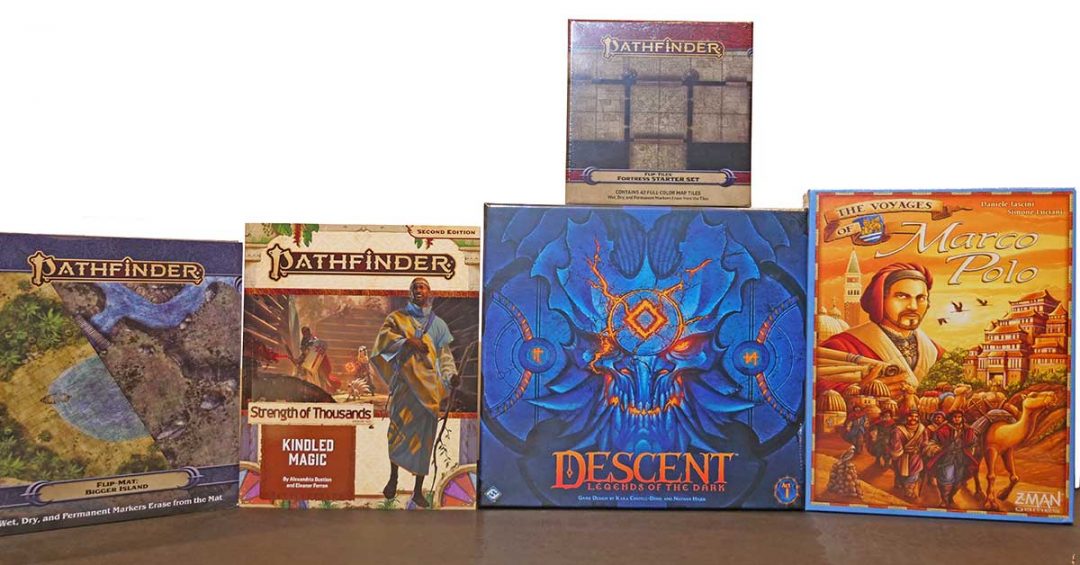 Those fantastic Summer Olympics draw to a close, and Team USA definitely represented! Amazing! Here at SVG there is no transition, we're always carrying the torch! There's new items on the shelves, a few restocks and preorders too - and our weekly news. You did hear about our current Giveaway?

Well goodness, let me find somewhere to set this torch down...not very practical at all...how can I type holding this thing...jeesh. Hello all, I'm Eric, and Wendy and I run Stone Valley Games, or SVG for short. If you're new, welcome to our weekly newsletter! So, this top portion contains a few news stories about the hobby we all love, and some shop news too. At the bottom of the post is our list of restocks, new items, and preorders that we laid in last week. So, if you want to skip the news and check out the new stuff just scroll on down...though you might want to hang out to learn about the Game Giveaway.

CLICK HERE to enter. So, not just a board game or two this month...no, we're mixing it up. We're giving away a copy of The Lord of the Rings card game, and the entire first cycle, Shadows of Mirkwood's six Adventure Packs! Not only that, but we opened and sleeved everything, and loaded a card box so there's a storage solution too. We left the tokens and such unpunched so the winner has some 'new game' work to do. That's thinking outside the box! TLotR Card Game is both thematic and fun, ranks highly on BGG, and gets better with every additional set. At over $170, this is something quite special!  If you've signed up or registered on our website for previous giveaways, you have to sign up for this one individually. Same thing for the next giveaway too, they don't carry to the next one automatically. Entry closes on 14 August, so jump on in if you haven't yet. 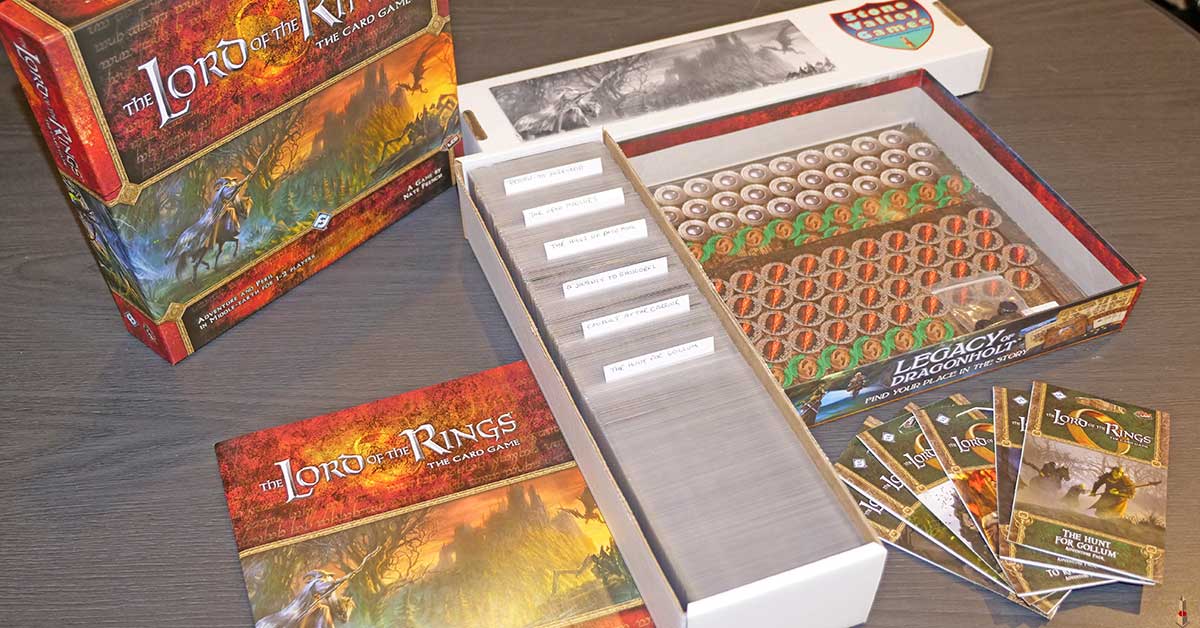 As we find time one of the things we like to do is reach out to publishers of amazing games and see if we can work out a retail partnership. One such company is Mindclash Games in Hungary, the folks behind fan favorites Trickerion and Anachrony. Awesome news, Balázs reached back out to us and told us we were on board! That's super exciting, as we've been after Anachrony specifically for over 18 months now! Plus, they always have something new and fascinating in the works...like Voidfall.

We also found out that the publishing license to the original Trickerion base game was sold to APE Games. So, Mindclash makes all of the Trickerion expansions, but we need to work with APE Games for the base game itself. Well, knowing is half the battle! Now, both titles are in between print runs on everything and the next wave is expected to hit sometime in October. So, there's a bit of a wait, but we'll soon be carrying the full Trickerion and Anacrhony lines of games. Check that off the list!

Let's talk about review systems for a second. Just so you know where I stand, as there are games releasing every week and literally hundreds of games releasing every year, gamers need some kind of system to help them decide if a game is for them. I mean, Shut Up & Sit Down can only do so much! (a little inside information for those who may not know, but anything SU&SD reviews well spikes significantly in sales across all platforms. Just see the results of their recent Hostage Negotiator review).

That takes us to a review system of some kind. After considerable research we've settled on Board Game Geek for most of our data. (We're StoneValley on BGG if you'd like to hit us up there). Generally it is a very good gauge of games, especially games with over 100 (or 1000+) reviews. However, last week demonstrates the problems with it, and any review system really. A game called Descent: Legends of the Dark released and just taking a glance at the score would cause some to run without a second look. However, if you were to look you'd see most of the 1 Star reviews are because the game has an app, and the majority of those are reviews by folks who haven't played the game. One of my favorite comments, "just hopping on the 1 star band wagon." Lovely. Others are upset in the direction Fantasy Flight took with the title from the previous versions.

Hey, having an app on a board game is super polarizing, I completely understand. However, that hate is built on previous experiences with apps that eventually became unsupported - not this app. Personally, before I review something I actually try the version of the game I'm reviewing. Then I can weigh it on previous versions, or if the app doesn't work, etc. I know, so boring! Not edgy at all! In any case, none of that is happening with Descent right now. Same can be said for the majority of those 1 Star sniper reviews across other titles.

At the end of the day though, these kinds of events are relatively rare for a site with so, so many opinionated gamers discussing so, so many games. For the most part the community self corrects to a center position quite well. Also, I often only glance at the score, and am much more interested in what folks have to say and the gameplay videos are great to see how the game plays. As there can be no infallible review system, BGG will be the one we stick with. Now you know why.

After another week of our own effort and significant assistance from our website Devs, three more updates are live.

First, you can now see the preorder date on both the grid and the product view. No more having to hunt around for it. Convenient!

Second, there was an issue that if you were on the product view, and you clicked the link next to the photo it took you to an unmonitored part of the WordPress site we built everything on. Now if you click that link it will take you back to the grid view category that you came from. Still a bit of work as the first selection in that chain still takes you to an unmanaged WordPress artifact. However, this task is being accomplished through a lot of link redirection and takes some time. So, we'll keep plugging away. Progress!

Finally, the 'add to cart' buttons on the search results page match the color/activity scheme of the rest of our site. No more purple.. I mean, it's a cool color, especially for light sabers, but it's not our website color scheme.

Believe it or not, but that's it. I don't have anything left on my list of fixes / tweaks! So I'll take the website out for a spin or two to see what pops up. If you'd like to see a tweak or change just let me know.

One of the interesting aspects of owning a shop is everything is done by us. No kidding, right? That means certain things move at the pace we can work them. We primarily focus on turning orders into packages and shipments, taking care of customer queries, working with our local customers, and ensuring the products remain updated and reordered properly. Then, with the new grandbaby on the scene Wendy is spending a lot more time there. Hey, no complaints, it's just what's going on. So, on a busy day that's about it. That pushes website development, R&D, product research and those kinds of tasks to a second tier.

Well, one of those second tier tasks is complete now that we've loaded our shop and the majority of our products properly into Google. It's still a work in progress. For example, I have a lot of our RPG books labeled [Print + PDF] in the title - for those physical books that you can obtain the PDF for free. However, Google flags those as ineligible because digital products cannot be featured. So, I'll have to come up with a different naming convention to get them to pass the filters. The list goes on, but you get the idea.

My next task there is trying to align the CR review system we use in the webstore with Google reviews, but it's not working out so well. At least not yet. You may know Google reviews really help demonstrate a store's legitimacy and helps move us up in search results. I once asked for help when we received a rogue one star review from someone...not even a customer. I'm asking again, if you've shopped with us and would like to tell Google (and everyone else) about it we sure would appreciate it! Just hit this link: Stone Valley Games Review

That'll do it for this week! Below are the Restocks, New Items, and Preorders added to the shop last week. You can click on the item to learn more, and many of the products have review and gameplay videos so you can see the game in action. If you're visiting our page and you'd like to keep up with our giveaways, sales, new products, and articles like this one just create an account here. Once created you will be subscribed to our newsletter and become enrolled in our loyalty system, instantly earning 50 Stones that you can use on your very first order. A Stone? One Stone is equivalent to One Cent. That doesn't sound like much, but you earn 2 Stones for every dollar spent and 5 for each product review, so though it may seem small, those savings add up fast! Redeem your Stones upon checkout, and they can save you up to 10% off your cart total. Loyalty Matters!