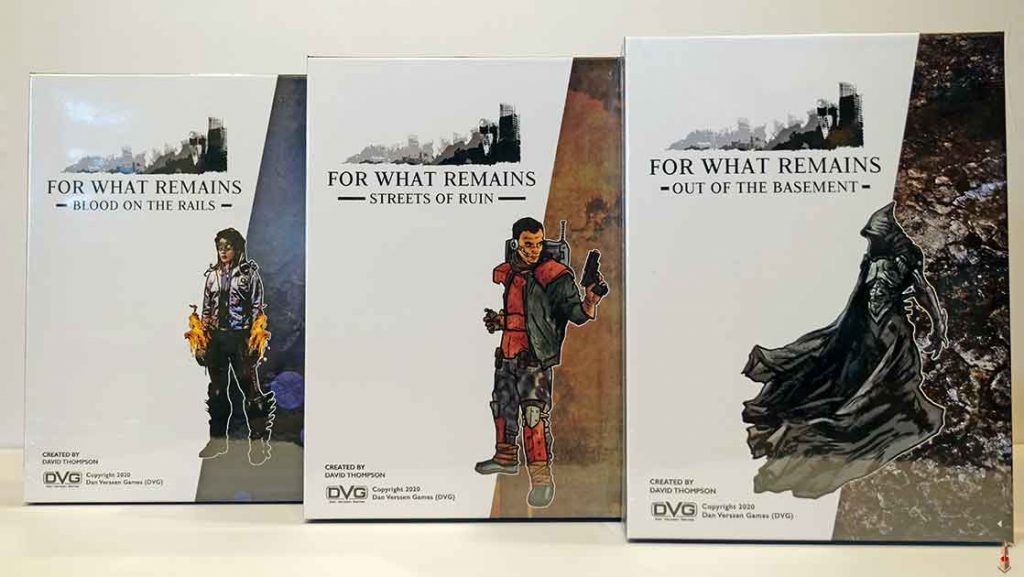 Hot off the Presses is For What Remains, a skirmish-level wargame set in a post-apocalyptic near future. The game is designed for 2 player competitive play or solitaire play. There are three different core game options; each of the three core games can stand alone, or you can combine them to play the entire campaign.

There are two ways to play For What Remains: skirmishes and campaigns. Skirmishes are standalone games played for a single victory, with no lasting repercussions. Campaigns are a series of skirmishes linked together to form a larger narrative. For What Remains is a scenario driven game. Each scenario typically has multiple objectives, and combat between factions is usually secondary. Players win skirmishes by gaining victory points through accomplishing these objectives.

Each core game comes with two factions and features a set of double-sided game tiles that are thematically linked to the game's campaign storyline. The tiles in each of the core games can be combined with the tiles from the other core games for an almost limitless number of battleground configuration options. In addition, while each campaign provides its own storyline, there is an overarching story that begins in Streets of Ruin, continues in Blood on the Rails, and then ends in Out of the Basement.

By the way, if you'd like to keep up with our giveaways, sales, new products, and articles just ‘Register’ to our website here. Once you register you automatically become enrolled in our loyalty system, instantly earning 50 Stones. A Stone? One Stone is equivalent to One Cent. That doesn't sound like much, but you earn Stones with every purchase and product review, so though it may seem small, those savings add up fast! Redeem your Stones upon checkout, and they can save you up to 10% off your cart total. Loyalty Matters!