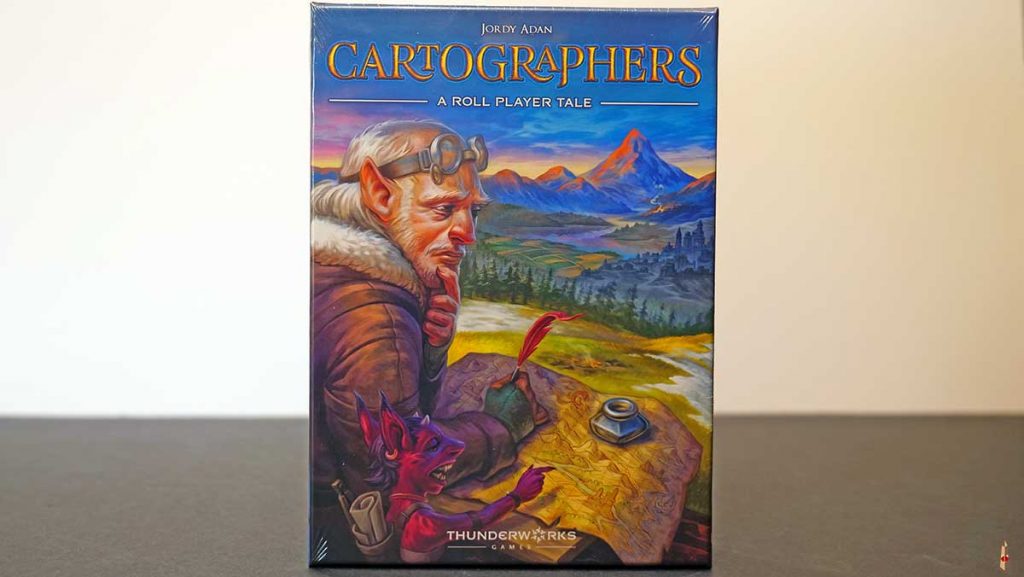 In Cartographers: A Roll Player Tale, you are a cartographer for the Queen and must compete to sketch the most efficient map. In the roll & write category, actually a flip & write since it uses cards, you draw a card which specifies the terrain you have to draw, scoring points for placing the terrain in certain areas. The variable set-up and scoring adds good replay value, rules are relatively simple, and gameplay is fast. It's in the Top 20 Family games on Board Game Geek for its relaxing landscape sketching while being casual enough for children. How does it play solo?

Well, first it's easy to grab and go for the solo traveler. Like most flip & write games, there is a lot of game in a small package, so it's super travel friendly. While the game touts it can play up to 100, one of the drawbacks of the game is such limited interaction between players that it plays solo almost better than multiplayer! On the other hand, some feel the scoring is too random which makes the game more difficult than it should be. However, there is a score target for each of the goals so it is possible to win instead of simply chasing the high score. Don't be mistaken though, pleasing the Queen is no easy feat! We have to say that Cartographers is an excellent game, even if just for solo play. As a family game that someone can play on their makes it even more interesting. Excellent system, relatively easy and definitely quick gameplay makes this a solo game that should be hitting the table quite a bit, which should be easier now that we have it on sale for less than $20!

By the way, if you'd like to keep up with our giveaways, sales, new products, and articles just ‘Register’ to our website here. Once you register you automatically become enrolled in our loyalty system, instantly earning 50 Stones you could use on your very first purchase. A Stone? One Stone is equivalent to One Cent. That doesn't sound like much, but you earn 2 Stones for every dollar spent and 5 for each product review, so though it may seem small, those savings add up fast! Redeem your Stones upon checkout, and they can save you up to 10% off your cart total. Loyalty Matters!