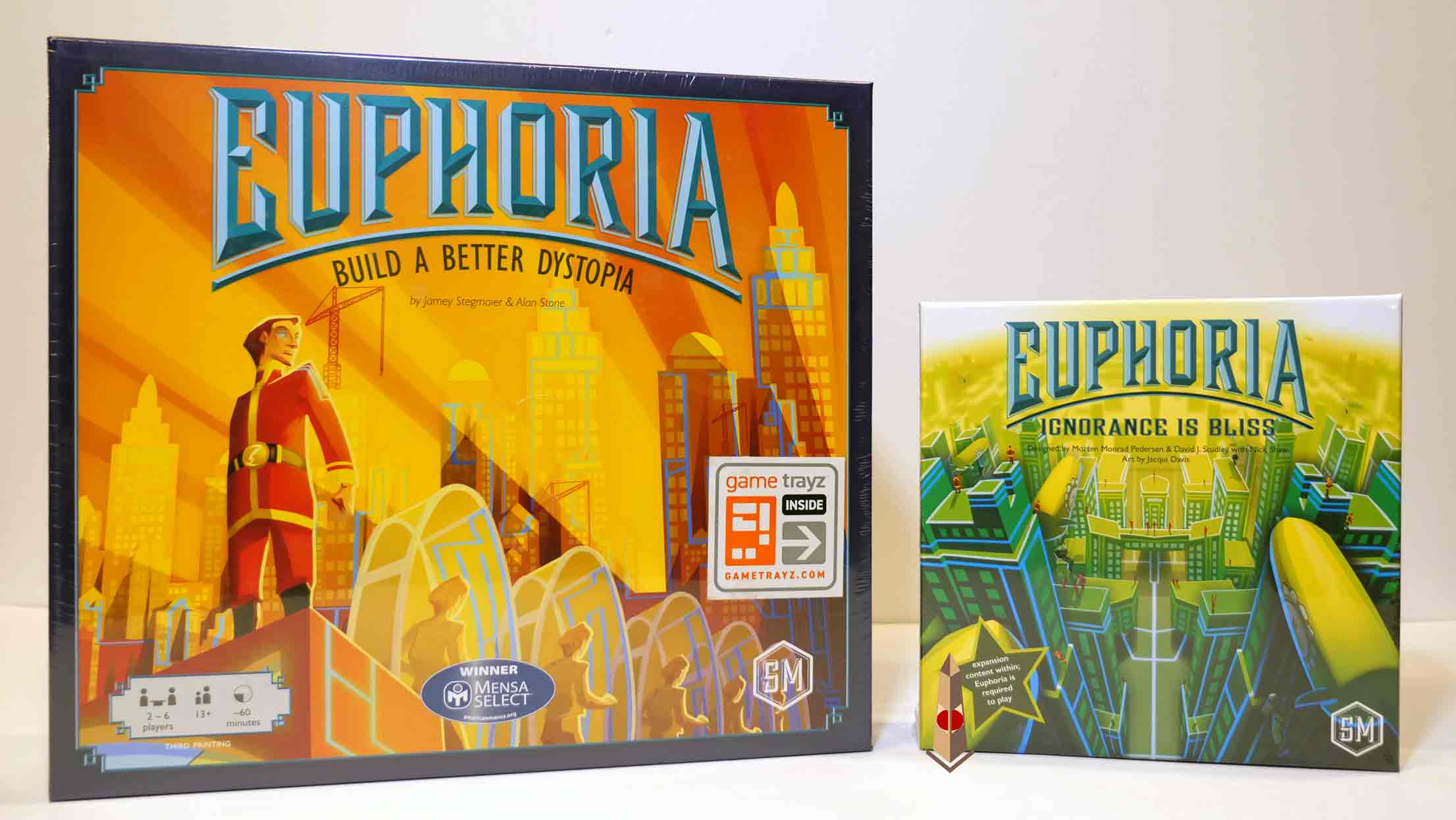 We face our future in this week's solo spotlight: Euphoria: Build a Better Dystopia. So you know, Brandon and Carter just released Episode #62 at Solosaurus podcast where they provide their always amazing, insightful, and exceptional characterization of this very game while focusing on solo play. We like to listen to them on Spotify, but they are sure to be availalbe whatever audio service you enjoy.

Yes, it says 2 - 6 players on the box, but with the recently released Ignorance is Bliss expansion solo play is possible. Now, the original Euphoria has been around for quite a long time, but it's quite obvious that Jamey Stegmaier listened to players and critics in the development of the Ignorance is Bliss expansion. Not only does it fix issues with the base game (tunnel tracks, minority bonus, doubles rule, reduces luck factor - among others, and does all of this with the addition of only a few rules) but opens up the way for solo play through the addition of an automa. Not only does it allow for solo play, but it rounds out the game for any lower player counts. Like almost all of the games published by Stonemaier, its production is excellent. It even has a Game Trayz brand storage system included in the base game - that accomodates sleeved cards. Also like many of Jamey's games, it will most likely take a playthrough or two in order to fully appreciate and understand what exactly is going on. We do have 'how to play' videos included below to help in that area. That time investment is well worth it though, as the worker/dice placement and variable powers on the cards really start to click. So, if you like games on the bit more crunchy side, enjoy worker/dice placement games and are interested at all in the theme you should really give this one a shot.

By the way, if you'd like to keep up with our giveaways, sales, new products, and articles just ‘Register’ to our website here. Once you register you automatically become enrolled in our loyalty system, instantly earning 50 Stones. A Stone? One Stone is equivalent to One Cent. That doesn't sound like much, but you earn Stones with every purchase and product review, so though it may seem small, those savings add up fast! Redeem your Stones upon checkout, and they can save you up to 5% off your cart total. Loyalty Matters!

2 – 6 Players (Though the Ignorance is Bliss expansion allows for Solo Play), 60 Minutes, Ages 13 and up. Euphoria: Build a Better Dystopia scores in the 7’s on Board Game Geek. Players appreciate the production value of this game. It has really interesting and at one time unique worker placement and resource management mechanics. This is another game that plays really well solo (with the expansion) and like many good strategy games take a play or two in order to understand all the possibilities involved to make better decisions. Manufacturer: Stonemaier Games. Category: Science Fiction. Game Mechanics: Dice Rolling, Hand Management, Race, Set Collection, Variable Player Powers, Worker Placement, and Worker Placement with Dice Workers.

Euphoria: Build a Better Dystopia. You find yourself in a dystopian cityscape with a few workers at your disposal to make your mark on the world. Like most people in dystopian fiction, your workers are oblivious to their situation. This world is all they’ve ever known, and you may use them at your whim. The world as we know it has ended, and in its place the city of Euphoria has risen. Believing that a new world order is needed to prevent another apocalypse, the Euphorian elite erect high walls around their golden city and promote intellectual equality above all else. Gone are personal freedoms; gone is knowledge of the past. All that matters is the future. The Euphorians aren’t alone. Outside the city are those who experienced the apocalypse firsthand—they have the memories and scars to prove it. These Wastelanders have cobbled together a society of historians and farmers among the forgotten scrap yards of the past. There is more to the world than the surface of the earth. Deep underground lies the hidden city of Subterra, occupied by miners, mechanics, and revolutionaries. By keeping their workers in the dark, they’ve patched together a network of pipes and sewers, of steam and gears, of hidden passages and secret stairways. In Euphoria: Build a Better Dystopia, you lead a team of workers (dice) and recruits (cards) to claim ownership of the dystopian world. You will generate commodities, dig tunnels to infiltrate opposing areas, construct markets, collect artifacts, strengthen allegiances, and fulfill secret agendas. Euphoria is a worker-placement game in which dice are your workers. The number on each die represents a worker’s knowledge—that is, his level of awareness that he’s in a dystopia. Worker knowledge enables various bonuses and impacts player interaction. If the collective knowledge of all of your available workers gets too high, one of them might desert you. You also have two elite recruit cards at your disposal; one has pledged allegiance to you, but the other needs some convincing. You can reveal and use the reticent recruit by reaching certain milestones in the game… or by letting other players unwittingly reach those milestones for you. Your path to victory is paved with the sweat of your workers, the strength of your allegiances, and the tunnels you dig to infiltrate other areas of the world, but the destination is a land grab in the form of area control. You accomplish this by constructing markets that impose harsh restrictions of personal freedoms upon other players, changing the face of the game and opening new paths to victory. You can also focus on gathering artifacts from the old world, objects of leisure that are extremely rare in this utilitarian society. The dystopian elite covet these artifacts—especially matching pairs—and are willing to give you tracts of land in exchange for them. Four distinct societies, each of them waiting for you to rewrite history. What are you willing to sacrifice to build a better dystopia?

There are no questions yet

Your question will be answered by a store representative or other customers.

Thank you for the question!

Your question has been received and will be answered soon. Please do not submit the same question again.

Thank you for the answer!

Your answer has been received and will be published soon. Please do not submit the same answer again.