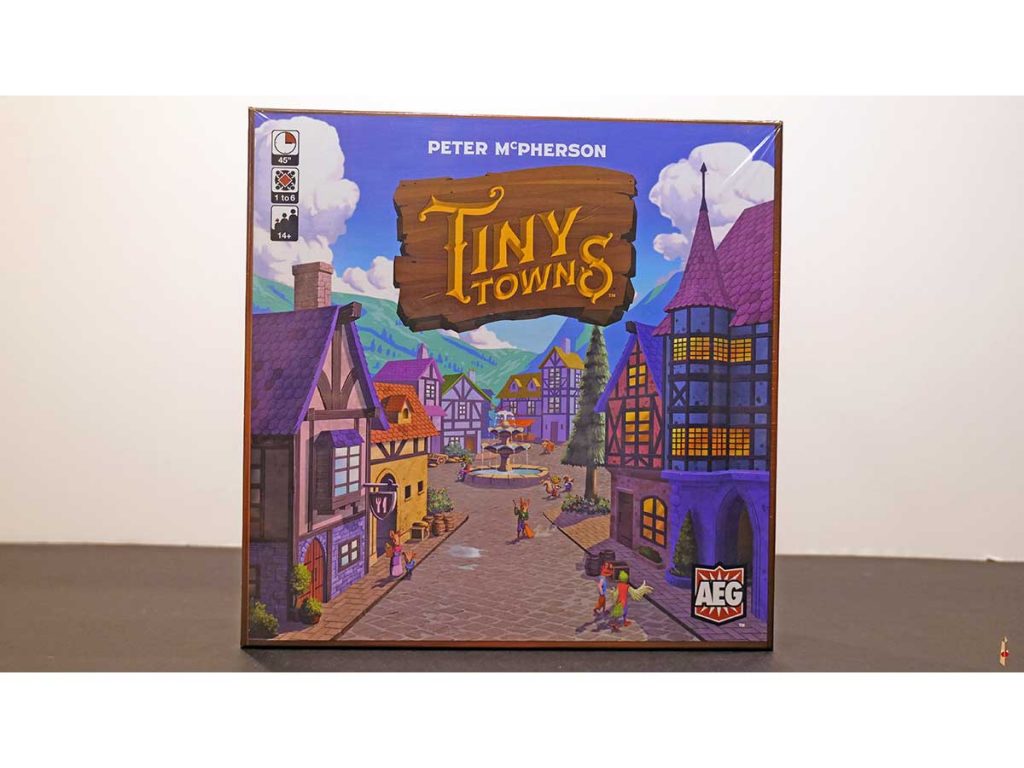 Tiny Towns scores in the 7s on Board Game Geek and is a town building game where you turn resources into buildings. It can be played with up to 6 players, but today we're going to delve into the solo play aspect. Tiny Towns feels like it has been influenced by the game Patchwork. Unlike many others, Tiny Towns maintains ease of play and doesn't try to stray too far away from a pleasant puzzle.

Components are great, consisting of well made wooden tokens in different building shapes and the cards are tarot sized with nice art and graphics. The rules are straightforward, and solo rules are well defined.

Set-up is quick and easy, and what needs to be done is defined clearly on the flipped available building cards. After a play or two there really isn't any need to refer back to the rulebook.

Solo play is basically the same thing as multiplayer. In solo mode, a deck of cards represents your opponents. It is true that the solo game is more predictable than multiplayer in that you know the possibilities of resources that will come out, you just don't know what will pop out of that deck or when.

Once everything is set up the 4 x 4 grid card is completely empty. At this point it is wise to take a second to look at the symbiotic relationships between available buildings. These relationships will help guide resource placement and scoring criteria. While there are a myriad of overall building possibilities in the box, each game will only have a small subsection of buildings in play at one time. This significantly increases replayability. As the game goes along, the surface of the 4 x 4 becomes more constricted, adding some some nice tension. Throughout the game, different resources are played in the available squares. Their placement can often be used to construct more than one kind of building, which allows you to be flexible as you play. As you never know what your opponent will do to block you, having a backup plan is key.

When it comes to a winning condition, this is a beat your own score game. While some players are immediately turned away by that, we have learned that many games don't lose any of their charm or replayability with a high score system. Cartographers is an example of another nice puzzle game that...well, they really don't need a win condition. Just trying to work out more efficient layouts and combinations is the point, and makes for a great experience.

Bottom line, if you're a solo player looking for a fun, relaxing puzzle with fantastic replayability we recommend Tiny Towns.

If you're visiting and you'd like to keep up with our giveaways, sales, new products, and articles like this one just Create an Account. Once that's done you automatically become enrolled in our loyalty system, instantly earning 50 Stones you could use on your very first purchase. A Stone? One Stone is equivalent to One Cent. That doesn't sound like much, but you earn 2 Stones for every dollar spent and 5 for each product review, so though it may seem small, those savings add up fast! Redeem your Stones upon checkout, and they can save you up to 10% off your cart total. Loyalty Matters!