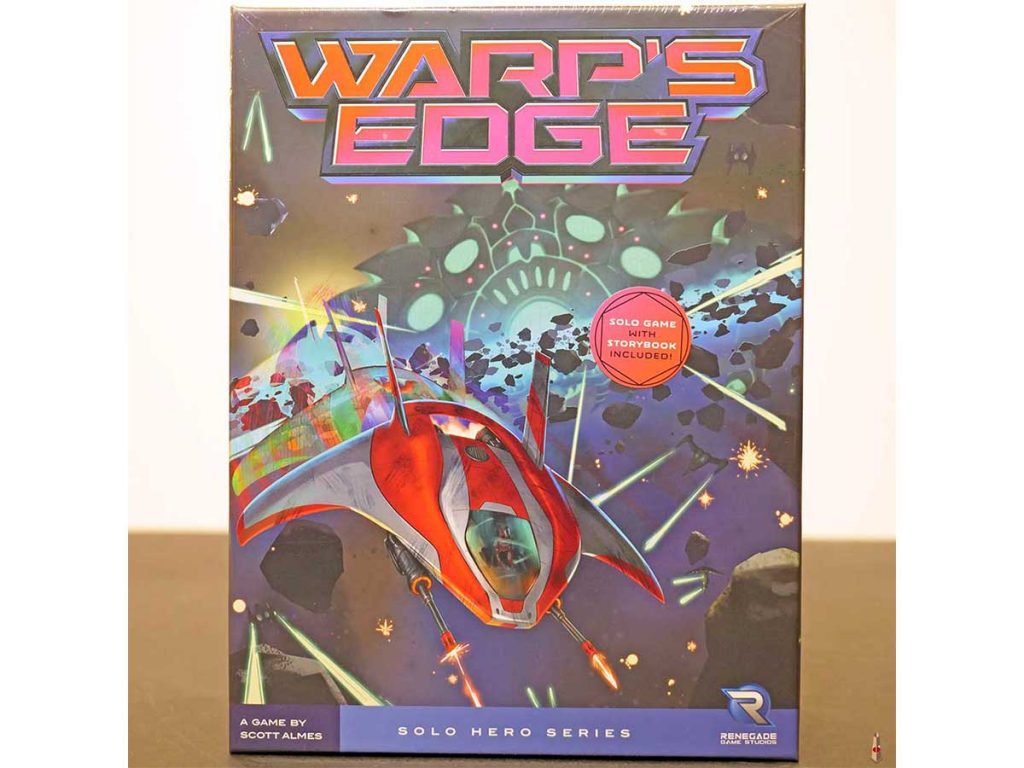 There was a bit of a mix-up, and it looks like we're going to review this game again in two weeks...since the Solosaurus Podcast Episode #70 is an awesome interview with game designer Drake Villareal and not a review of Warp's Edge...that review will be in two weeks so you'll see this one again 😀 Just imagine we drop into a warp and we'll do even better next time based on what we draw from the bag!

This week we provide a solo player's review of Warp's Edge! Warp's Edge is a solo only deck - bag and pool builder set in the far-flung future where you are outmanned, outgunned, and alone... but, that nearby black hole may turn out to be advantageous...

Warp's Edge is a solo player game, and like most solo player only games it is fairly difficult, albeit not nearly as difficult as some (looking at you Friday...). The art, components, and cards are very good. As a solo board game it often finds the table more often than those larger, meatier games just because its ease of set-up and tear down, which is quick and simple. Each game takes about 30 - 45 minutes and it's not too difficult to get a few plays in an hour.

If we had to give it a theme, it's a bit like The Last Starfighter meets Edge of Tomorrow. The concept is you've been flung far behind enemy lines, and alone must defeat the mothership nestled among numerous defenders. There are 3 to 4 rounds, or 'warps' to defeat the mothership. Enemies can be evaded or defeated. Begin by drawing enemies, draw tokens from the bag, use actions with those tokens, resolve enemy attacks, then draw 5 more tokens. The round is over if you need to draw tokens and cannot. With each warp you level up by having more powerful skills and abilities to draw from the bag.

Due to the drawing factor there is some randomness, but there are enough mitigations that it doesn't detract from the experience.

Defeating the boss is a real challenge, and once you've defeated the mothership (and there are five bosses and four motherships, so plenty of unique challenges of increasing difficulty in the base game) you feel a real sense of accomplishment!

A couple of minor nit-picks are the rulebook and the iconography. While we didn't have an issue with the rulebook, some folks reported that they had to keep referring back. When we play a new game, we generally go through several playthroughs until the rules are familiar, than we really don't need the rulebook anymore. For iconography the symbols are straightforward for the most part, but in some areas of the game - like the power tokens, it uses art. Some folks do not want to learn another set of icons and in some cases using art can throw people off, and these players would rather have words. So, if you're of like mind you know which side of that you'd fall on.

All told, Warp's Edge is a highly enjoyable, quick, bag-building fun time! With just a touch of randomness and plenty of tactical decisions to be made, isn't it time you strapped in and prepared for lift off?

By the way, if you'd like to keep up with our giveaways, sales, new products, and articles just ‘Register’ to our website here. Once you register you automatically become enrolled in our loyalty system, instantly earning 50 Stones you could use on your very first purchase. A Stone? One Stone is equivalent to One Cent. That doesn't sound like much, but you earn 2 Stones for every dollar spent and 5 for each product review, so though it may seem small, those savings add up fast! Redeem your Stones upon checkout, and they can save you up to 10% off your cart total. Loyalty Matters!