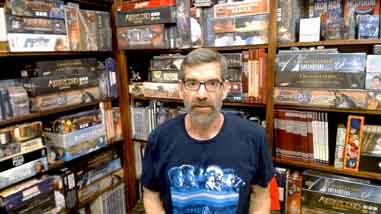 We’re still working our way through the initial core set of Marvel Champions the Card Game. So much game in this box! We’ve already shown Spider-Man, Captain Marvel and She-Hulk. In this solo play, Eric tries Iron Man against the villain Klaw. Based on earlier games, we aren’t going to use Aggression, even though that’s Iron Man’s standard setup. We’re going to try the Leadership aspect cards instead. As Klaw is no joke with his base deck, we’re leaving him Standard for this game. Will we be able to assemble Iron Man’s suit in time for him to defeat Klaw, or will Klaw’s ability to throw Minions and Threat be too much? Check it out!

Marvel Champions is a Living Card Game (LCG) that supports 1 – 4 Players and scores an 8.1 on Board Game Geek. Category: Card Game and Comics. Game Mechanics: Cooperative Game and Variable Player Powers. Get in on the ground floor in this brand new game. As you may know, Fantasy Flight has several well defined LCG’s under their belt. The list includes A Game of Thrones, Arkham Horror, Lord of the Rings, Call of Cthulhu, and Star Wars. With each version they’ve streamlined gameplay a little more. Now, many cite this an almost perfect playing experience. If you’re on the fence about LCG’s, they play like a Collectible Card Game (CCG) and have the constantly evolving game play but without the “blind buy” of products that you don’t know what you’re getting. This core set gives you multiple decks that can get you playing right away – like Iron Man vs Klaw!