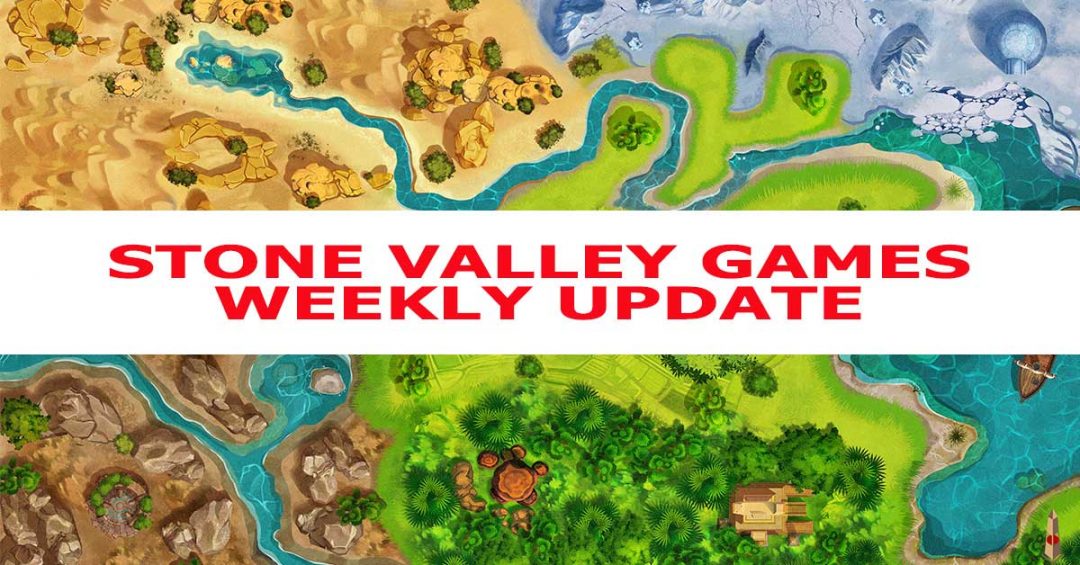 Don't forget to sign up for our latest giveaway - we're drawing for the winner soon! Another wonderful week behind us, and while we didn't have a lot of influx, we were sure busy catching up on current games...much like many of you, right?! We also have another neat piece of original art to show off, so why not pop in and see what we've got going on?!

Welcome to our weekly newsletter! For our new readers I'm Eric, and Wendy and I run Stone Valley Games. This newsletter is our way to discuss both local and world-wide gaming news of interest that popped up last week. It also provides our customers, both local and remote, some information on the going's on around here so everyone feels like part of the action. At the bottom of this newsletter we show you the restocks, new items, and preorders added to the store last week. Not too difficult to navigate, so let's get to it!

If you haven't yet, make sure you act soon as we're drawing for the winner at the end of the week! CLICK HERE to go to the sign in page to check it out.

While April starts with April Fool's Day, we see April as the month in which the long grip of Winter gets tossed back into the seasonal prison for another year. In that spirit, we're giving away the Lockup Bundle!

So, what's Lockup all about? Basically, you command a squadron of captured Dragul. Gather goons and craft contraband to raise your reputation. Keep your suspicion with the guards low while establishing yourself as the most powerful crew in Kulbak. In six short days, Taron may offer you the chance to fight for your freedom!

Our giveaway is open to everyone in the United States. The winner will be drawn on 16 April 2022. If you could do a solid and share this info with your family, friends and gaming groups, we'd be very grateful! 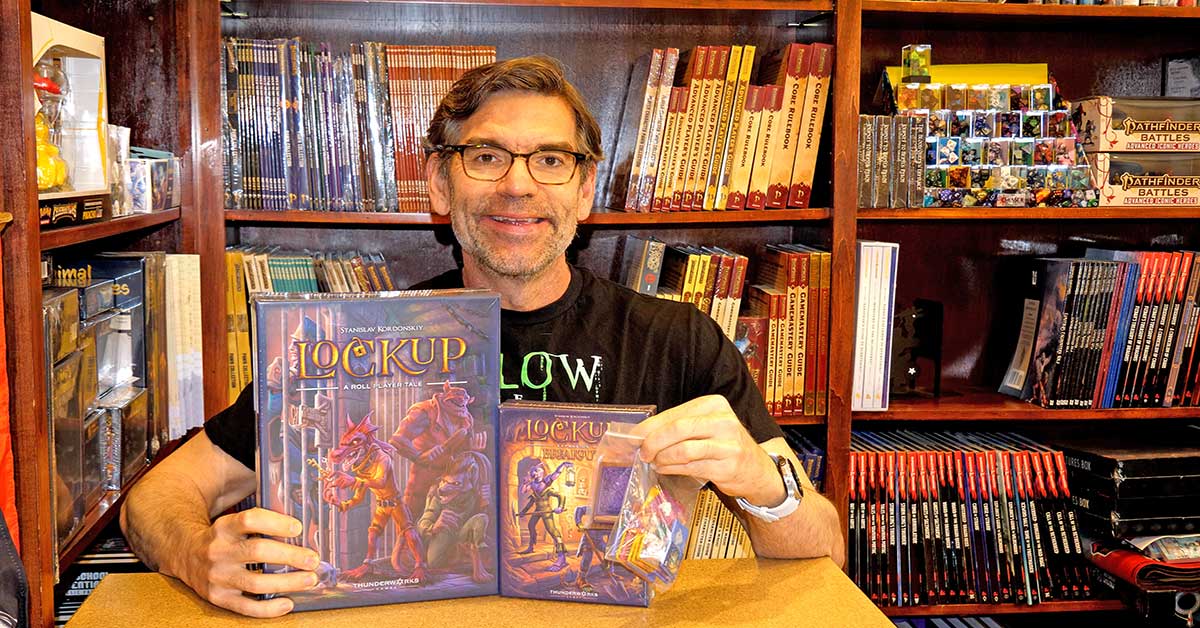 Eric shows off the Lockup bundle!

A few weeks ago, we introduced you to Asmodee's recently released Print and Play information. Well, they've added even more content, for both Smallworld and Small World of Warcraft!

This is a nice resource, with complete games, game add-ons and more, all at the low-low, rock-bottom price of free. Here's the link so you can see if there's anything there that piques your interest: Asmodee Print & Play.

Everyone has their opinions on all of the publishers, Asmodee is not different, but it's things like this that demonstrate some of them are attempting to give back to the community that supports them.

For our long-time readers, you have been following our journey to grow into a larger storefront. Over the last 18 months or so, we've found the property, had the plans drawn up, and started looking into contractors and financing.

Well, based on how impactful business taxes have been the last few years, the recent spike in inflation with more on the way, and cost of not only construction materials - but in most cases labor as well, we're putting our expansion plans on hold.

We make large decisions based on business viability with the continual, all-encompassing goal of exceptional customer service. If we were to take this next step now, we would put the entire enterprise at risk. I am good at gauging risk and would consider this very high risk. You might have heard that board game shops run on tight margins to begin with, which is quite true. So, without being able to start with even footing on at least three of the four main issues (taxes, inflation, construction materials, labor) there would be no way to get back into the black. With no parachute or workaround, it's just not a very good business decision right now.

So, for the foreseeable future we will remain right here. Far from being stagnant though, we are working on some rearrangement concepts to shake up the space a bit. After all, I do plan on adding another product line or two. We'll be discussing that more in future newsletters. So, if you've stopped in before, you don't have to worry about not being able to find us anytime soon!

When we first started thinking about a store logo long ago, we wanted something timeless, something that works with both ancient and futuristic themes. Simultaneously, I was working on a home-grown roleplaying world - one that I had been toying with since I was in my late teens. In that world there was a tower, and over time that tower concept became an obelisk with a gem of power in the center that has all these magical properties. I'll stop there...I could go on and on and geek out, but I'll spare you. Bottom line, that obelisk became our shop's main logo, and you'll see it in all of our merchandise.

Lately we've been working with local artists to develop new art, and we have another one ready to show you. This latest piece is a maturation of the obeslisk in its original concept as the tower...and what better representation of The Tower than tarot? 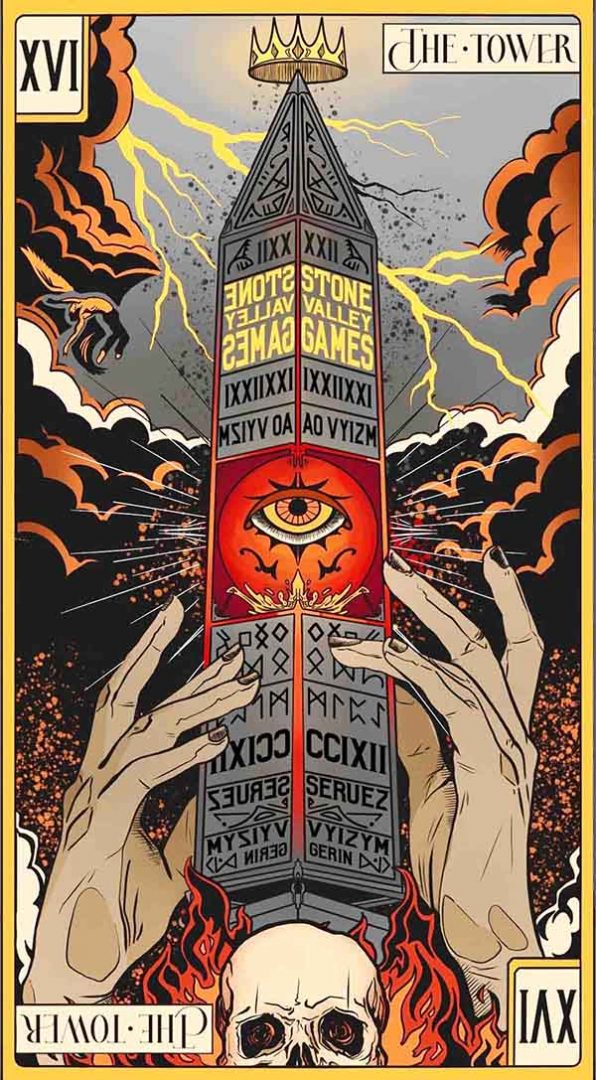 In tarot, The Tower has several meanings to include danger, crisis, sudden change, destruction, higher learning, and liberation. In a weird coincidence...what's more gaming than that?! In developing our piece of art, we've also made sure to include the two constant themes in The Tower, which are flames and lighting.

Ultimately, this is another way to get our Obelisk of Power logo into an art piece, and it has subtle clues (maybe not so subtle with the store name...but, you know) so it remains mysterious...and in our humble opinion, absolutely amazing.

We will be developing some merchandise from this, and plan on using it in other places too, like the back of a business card is a popular choice. I am also happy to say we're not done with original art pieces yet; we have a lot more projects on the to do list and can't wait to show them off!