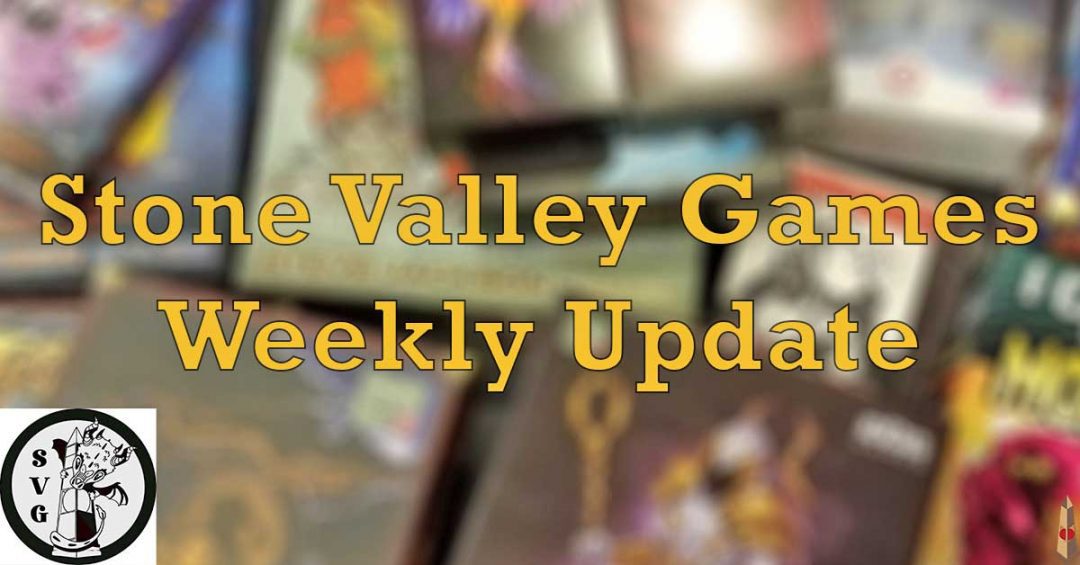 A few long-awaited Kickstarter games showed up this week, and several other new titles arrived too! In shop news, we catch you up on the Obsession board game reprint, talk about a new retail partnership, and witness the end of an era with a certain section of the webstore. Come on in and check it all out!

The transoceanic ship carrying Obsession is currently sitting off the coast outside of Savannah. At the current rate of distribution, Dan Halligan is anticipating the games to hit his location in late August. Then, based on the timeline Dan relayed to us, these titles will hit Stone Valley Games sometime before mid-September. So, we just put them up for preorder.

The 4th Printing has no gameplay changes from the previous printing and titles will include:

The only item missing then is the "Useful Box". Also know that Dan supports Friendly Local Game Stores with a storefront and will not work with retailers who only sell online. Because of this, he has requested that no retailer who also sells online (like we do) provide any free shipping method for his games sold online. That's why the Obsession titles we carry will not have a free shipping method. There is one exception. After speaking with Dan, he agreed to allow us to continue providing free shipping for this (and all) orders going overseas to our deployed military, their families, contractors, and embassy folks working overseas. This is something we explain in the Obsession product pages as well. The only other item Dan relayed was he didn't want storefronts who also sell online to provide discounts, so the Obsession titles are exempt from our promotional offerings too. He didn't give us a reason, but I believe it's because he doesn't want "competition" with his own online sales, which is fair. It's his baby after all.

Truly though, it is a game worthy of all the hype. You can check out an in-depth interview Dan just did for Board Game Geek's Cardboard Creations that's on the front page of BGG, or just hit this link. Then, the very popular folks at Shut Up and Sit Down! are preparing for an Obsession podcast, it might be available by the time this newsletter releases. Finally, the game will be releasing on Board Game Arena. According to Dan, it's in Beta testing right now.

So, if you've heard about it but never had a chance to play, the game is about to hit US retail once again! We're all so excited!

GAMES WORKSHOP ON THE HORIZON

After a long courtship, we have finally submitted our application to Games Workshop to become retail partners. I have been on the fence for over a year, as we have been happy with the distribution and publishing partnerships we have developed over the last several years. It was easy to keep saying no to Games Workshop though, we simply didn't have the space.

However, after our recent store reshuffle, we opened up a few spaces. One of them is a 3' x 2' section. That just happens to be just large enough for their entry-level retailer tier display.

So, if everything goes well with the application, we'll soon have some of Games Workshop's greatest hits in the store.

The last thing we were thinking about adding to the shop this year is modeling paint and supplies. We have one more small section of the store set aside for that display. So, once we get the Games Workshop section humming, we'll have to select a publisher too. There are just so many options...narrowing that down is taking me way longer than I thought it would. Then, once the modeling paints are in, we'll have all the store modifications we had planned for 2022 set up. We're getting there!

If you've checked out our Living Card Game titles (Marvel Champions, Arkham Horror, and The Lord of the Rings) recently you'll see that we've updated their webstore pages.

Then, with very little announcement, Fantasy Flight changed this up to a character box and campaign box for both The Lord of the Rings and Arkham Horror that combined all of those cards and began 'reprinting' all of the previous cycles and campaigns in this new format.

So, retailers like us that had the entire published catalog of the 'old' cycles on the shelf were kind of left in the lurch. We had thousands of dollars' worth of cards that were now obsolete. We contacted the publisher to see if they had any workaround or concepts on how we could exchange or return the old products. Unfortunately, they really weren't in the position to assist and couldn't really help us.

We do like the new format though. It's much easier to get an entire cycle or campaign together without the danger of missing out on a single card pack here and there that would break up the storyline. The problem was we were left holding the bag.

In any case, that's when we just placed all of our old cards on a 50% or greater reduction to liquidate them. We figured it was better to make 'some' money vs. none. At long last, as of last week we had completely purged the old cycles / campaigns and updated those Living Card Game webstore pages to the new format across the board. Easier for us, and for you.

Slipping on my cynical hat, I'm wondering when they are going to do something like this for Marvel Champions with all of those individual card packs. We'd be right back at the start again...

Our readers know full well that the primary goal of this newsletter is to share the happenings around here so folks can feel like a part of the action. We may be tiny, but we figure our trials, tribulations, successes and failures can help others going through similar things in their lives too. Really though, at the end of the day it helps keep everyone up on the latest.

In the "fairly significant news" category, we just found out that I will be undergoing hip replacement surgery in late October this year. Personally, I'm both relieved to see some eventual pain relief on the horizon and astonished...it's not like I'm 'old'...I'm in my lower 50's. Of course...I did beat the crap out of this body from youth up into my early 40's. Since my mid 40's I've been living with the ramifications of all that. It's been back and shoulder surgery, fallen arches, and Achilles tears to take care of so far, just to name a few.

In any case, this is going to significantly impact our storefront presence as the shop is on the second floor. I'll be unable to climb stairs for several weeks, maybe more than several. I'll still have some help for a few hours in the afternoons during the week which can cover our web sales, but the weekends and mornings will just be Wendy and me. However, Wendy's not really around much anymore during regular store hours.

As I mentioned about a year ago, ever since our wonderful grandson was born here in Huntsville, Wendy has transitioned to her primary role as Nana. She still takes care of most of the logistics in the store, but the day-to-day store operations are on me as she is simply not available. Don't get me wrong though, I am completely on board with this setup! We have to take care of family first, and I'm sure everyone understands that.

So, we have a little time to try and figure something out. I do know right this minute that we'll "have to see" on a lot of this after the surgery as things will hinge on how well I heal. I just wanted you to be aware that we're most likely going to have to make significant, though relatively short-term changes in the next few months.

Okay, enough news for this week! Below are the New Items and Preorders added to the shop last week. You can click on the item to learn more, and many of the products have review and gameplay videos so you can see the game in action. If you're visiting our page and you'd like to keep up with our giveaways, sales, new products, and articles like this one just create an account here. Once created you will be subscribed to our newsletter and become enrolled in our loyalty system, instantly earning 50 Stones that you can use on your very first order. A Stone? One Stone is equivalent to One Cent. That doesn't sound like much, but you earn 2 Stones for every dollar spent and 5 for each product review, so though it may seem small, those savings add up fast! Redeem your Stones upon checkout, and they can save you up to 10% off your cart total. Loyalty Matters!