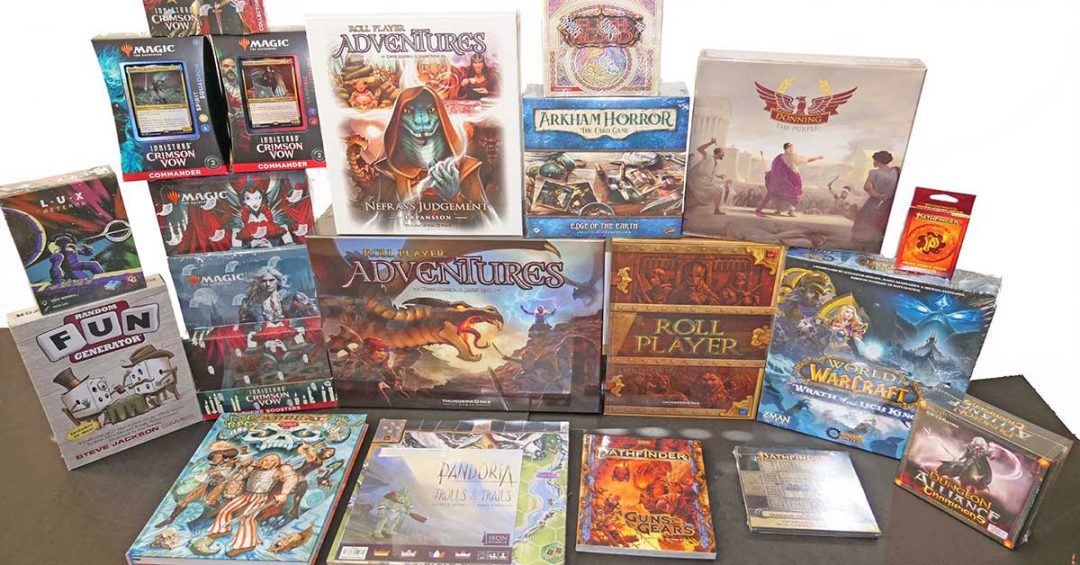 An incredible flood of games arrived! Was it the influence of the Lunar Eclipse?! From RPGs, board games, collectible card games...something for everyone! Plenty of restock too! This week we discuss our Black Friday plans and talk shop. Come on in and check it out!

Did you get a chance to check out that lunar eclipse? The natural world is so fascinating, and reminds me to look up once in awhile! Hi! I'm Eric, and Wendy and I own and operate Stone Valley Games. This is our weekly newsletter, and if it's your first issue let me explain it a bit. So, this top "wordy" portion is where we lay out local and gaming news at large. At the bottom of the post is wlhere we set up the restocks, new items, and preorders that we set up in the shop over the course of the week. No preorders this week, but plenty of the others! Let's get to the news!

We plan on running our Black Friday Sales Event from the evening of Thanksgiving thru Monday, 29 November. This, by far, is our largest sales event of the year! There's a lot going on, so much so that I've developed a special edition newsletter just for it. I have that scheduled to hit your inboxes on Thanksgiving...around noon. It will contain all of the sales information and the link to the sales page, so keep on the lookout for it! We'll also have it bannered in our webstore header too in case you miss the email.

Yes, unlike years past, this year I'm consolidating everything to a single page. Right now it's looking like 300+ items slashed from 30 - 50 percent. We're hoping you pop in either digitally or locally and check it all out!

I haven't given you a webstore update in awhile, so let me catch you up with the latest. We have done a lot of 'behind the hood' things, but there were three fairly distinctive updates you might have noticed.

First, we added the cart information to the cart symbol up in the webstore header. Now it keeps up with your cart items and by clicking it you can see what's in your cart without having to go into and out of the regular cart webpage. This is one of those 'Captain Obvious' updates, and a lot of folks didn't even know it wasn't there before.

Second, we added the sales percent to our sales badge. Now if you're in category view or product view you can see at a glance how much you're saving. Convenient!

Third, we've significantly streamlined our category view pages. I've removed all that SKU and Tag information, added the sales badges, and set up pagination to scroll. I've also streamlined the categories themselves and eliminated the 'Spotlight On' submenus to tidy things up. So, things are loading faster and when you get to the bottom of the list it just takes a few seconds to load the next 50...and you can keep on scrolling! I know a lot of folks find us thru Google and the like, but for folks who like to browse it really smooths things out.

We're working on another giant update in the background. As I'm sure you know, cell phone sales are significant in our industry. While our webstore is "okay" for cell, I wanted to do more, so we're developing a whole new look and feel for cell phone use. By simplifying the layout things should really fly.

It's been a long process, we've been working it for a few months on our development website. I'd say we're about 75% complete. I wanted to be able to roll it out for the Black Friday event, but we're not going to make it. After all, once I release it there may be some bugs to work out, and I don't want to be going thru that while folks are trying to get their games! It's all good though, because once it's up it'll be that much better around here.

I haven't done this before, but since I fielded several Kickstarter questions this week I thought it might be a good add. As you have probably noticed we'll periodically drop in Kickstarters or Gamefound crowdfunding titles as they release. You also probably noticed we don't put our crowdfunders in the webstore preorders page. We learned real early from unfilled campaigns that it's better to wait until we have the games in hand. Nothing worse then messing with people's expectations! I mean, regular preorders are already chaotic enough, right?

We have fairly refined standards for the games we do select. Let me share a few major assessment steps, though there are other nuances too. I can honestly say this has slowly been refined over the years as we learn more and more about the business.

1. We generally look for a game with a good solo mode, though there are a very few board games (I think one) with multiplayer only, and of course the RPGs. Generally though multiplayer only games are an auto-no for us.

2. Then we look at the difference between the KS version and anticipated retail version. This often appears very vague if it's discussed at all on the campaign page, but we've learned over time what to look for. We've found that most retail versions are not only just as good (with a few less bells and whistles but gameplay is the same) but are also significantly less expensive. So, either the KS has to have a really strong exclusives list mixed with affordability (which generally excludes companies like CMON) or it's a crowdfunding only release.

Talking about CMON, it's companies like that who have turned KS into just another distribution channel. It's not necessarily a bad thing, but we always have our eyes peeled for smaller publishers and lean in their direction. If a KS release is going to be a gigantic amount of boxes we'll generally pass. After all, even 'regular' releases are already often supersized!

3. We look at European or Asian games that will most likely not find general release in the US. Usually those are tied to smaller publishers too, so it's a win-win in our book. We have found some of the best new ideas or creative sparks have been coming from the small publishers who are still so very hungry for what they do.

4. We try our very best to see 'how the game will play.' This is often quite difficult, probably the most difficult criteria. One significant trend we've found is that publishers who provide flashy and beautiful layouts but also have limited or missing gameplay with a 'trust us' motif are generally trouble. You know, the ones with wording like "We've been game testing for three years" but don't have a gameplay video. Hey, if they really have been play testing for three years they should be able to demonstrate it! We understand many of these games are still in development, which is kind of the whole point, but if the game isn't developed enough to at least show the basic gameplay concept then they aren't to the point where we'd support them. Show us!

With that in mind, as you browse the following list you can see how well we did with our criteria and how it changed a bit over time.

Active Campaign (from most recent to oldest):

Awaiting Fulfillment: (from most recent to oldest):

Okay, so seeing them like that it looks like a load of super fun games heading our way! See anything on there that sparks your interest? Even though the list goes back about two years, it's still pretty considerable. Just think what it would look like if we didn't have a system!

That will do it for this week's news. Below are the Restocks, and New Items added to the shop last week. You can click on the item to learn more, and many of the products have review and gameplay videos so you can see the game in action. If you're visiting our page and you'd like to keep up with our giveaways, sales, new products, and articles like this one just create an account here. Once created you will be subscribed to our newsletter and become enrolled in our loyalty system, instantly earning 50 Stones that you can use on your very first order. A Stone? One Stone is equivalent to One Cent. That doesn't sound like much, but you earn 2 Stones for every dollar spent and 5 for each product review, so though it may seem small, those savings add up fast! Redeem your Stones upon checkout, and they can save you up to 10% off your cart total. Loyalty Matters!