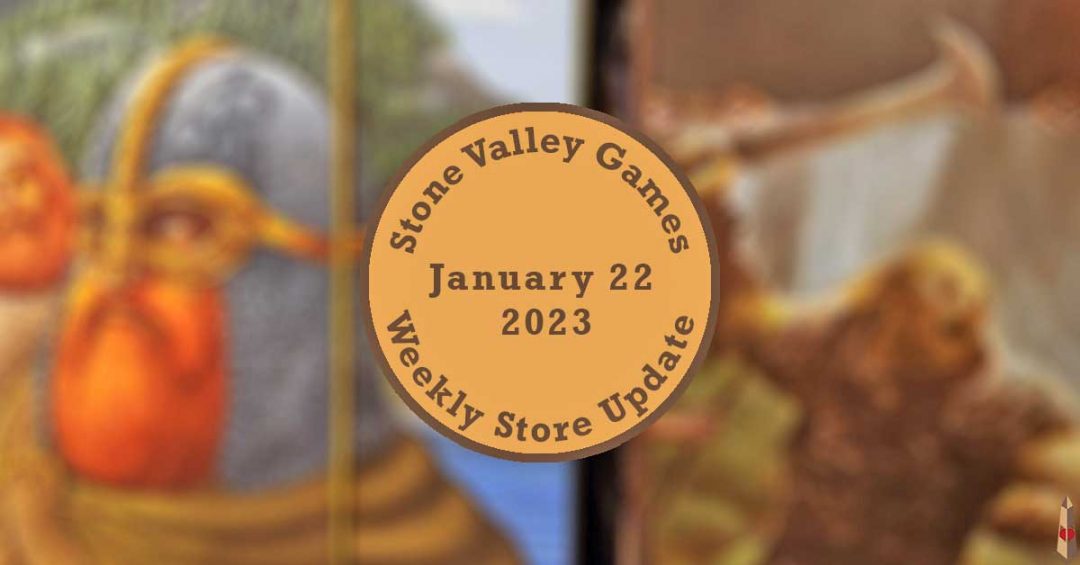 Oh, how quickly things can change! For some strange reason that I cannot fathom, we have been doing well above average with all of our roleplaying titles lately. Well... almost all... I'll tell you; we've been having a fantastic time discussing 'obscure' titles like Pathfinder and Savage Worlds to new customers. We anticipate things will eventually settle back out, but we're enjoying this renaissance while it lasts. There's far more going on around here than RPGs though, like our NEW YEAR sale, so check us out!

Welcome to our weekly newsletter! For our new readers I'm Eric, and Wendy and I run Stone Valley Games. This newsletter is our way to share both local and world-wide gaming news of interest that popped up last week. It also provides our subscribers, both local and remote, some information on the going's on around here so everyone feels like part of the action. At the bottom of this newsletter we show you the restocks, new items, and preorders added to the store last week. It's not too difficult to navigate, so let's get to it!

One of our operational changes going into 2023 was to have more sales and special events. We wanted those who have signed up to our newsletter 'get' something for their participation. We kicked it off a few weeks ago when we tried a flash sale for the Relics of Rajavihara (Bundle), and it went really well. I figured we'd try something else along those lines but change it up by going bigger.

So, from now until midnight 31 January Central Time, use Coupon Code NEWYEAR in your cart to save 15% on orders over $100.00. One coupon code valid per customer, and they cannot be used in conjunction with other coupons.

We'll give you several days to jump on anything you've been eyeing in the webstore before we open this up to the general public. So, Happy New Year and Have fun!!

Looking back, I wish there would have been better options than WordPress when we were standing up the webstore. Shopify wasn't around yet, and the other options were well beyond our financial means. However, over the years I have become quite adept as a Doctor Frankenstein to this page. All of the different plugins and add-ons coming together in semi-perfect harmony. Generally. Lightning is still sometimes required...

As such, we are often tweaking things that normally would be cohesively packaged in other setups. Last week saw us with three minor-ish issues. As I'm writing this, a few are still lingering.

The first is a follow-on from our site security setup we enabled early last year. What the system has been doing is sending new subscribers an email with their username and password. I wasn't even aware the system was still doing that, as it was supposed to have been fixed. It took yet another plugin to get that corrected. It wasn't too dire on an issue, as there isn't any financial information stored anywhere in subscriber accounts. Also, the subscriber accounts are surgically separated from the webstore or website management itself. However, it was against cybersecurity best practices, so we're happy to clean that up.

The next issue is our cart in the header at the top of our webstore. It's back to not working, so we sent a request to have that fixed to the very same developers that fixed it the first time. I mean, how hard can it be to have a cursor hover option on the header cart to see what's going on? Well...obviously on a WordPress site, it's quite difficult. I anticipate this won't take long to correct though, so hopefully it's a non-issue as you read this.

Which brings me to another other situation with WordPress. The WordPress software and all associated plugins required to make things run are usually developed by different companies. All of these plugins are also in different phases of their own software development cycle too. So, a change in one can have catastrophic impacts on other plugins. Naturally there isn't any cohesive update cycle or methodology to let us know what's happening...it just kind of happens. Then things kind of stop working correctly.

So, what most likely happened is WordPress changed something and now the Header Cart doesn't display what's in the cart with a cursor hover. I believe software update compatibility is the same culprit for the next issue too.

You may have noticed we have pages with an internal filter, so customers just need to hit the filter to narrow things down (like 'Adventures' in the Pathfinder page shows you all the different adventurers only). That mysteriously now doesn't work across the entire site.

Final bit... each of those faults had to be explained to different developers thru their own, significantly different trouble ticket interfaces, who are now working on their own repairs independently. It just makes me feel like...

A few weeks ago, I dropped a 'calling all cars' in these very pages. You see, I was just standing up our store in TCGPlayer as our longtime relationship with Deckbox has been wearing quite thin. In order to get to the same kind of functionality in TCGPlayer, I needed to get to Level 4. So, I did something I have only done one other time in our existence, and I asked for help.

So, our Magic the Gathering customers must not have seen that newsletter as we did not get any current customers on TCGPlayer. Regardless though, we still made it to Level 4 already! I am shocked. Due to their rules on requirements to reach Level 4, I anticipated the better part of four to six months to get there. Well...it took ten total days. After reading their rules, I developed a strategy to move cards quickly, and it really worked. What I should do is write a 'how to' about becoming a Level 4 seller on TCGPlayer in under two weeks... but I don't think this is the audience for that 😀 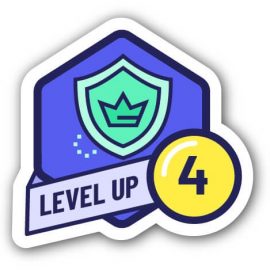 I'll simply say that ultimately our entire Magic the Gathering product line will be in TCGPlayer. Thru them and their Pro status, we'll have our own focused website that local and remote customers can order their cards from. Local folks can pick them up right here and remote folks can expect a package. This will include our singles, packs, boxes and bundles as well.

I have just begun the arduous process of transferring our inventory from one system to the other. It's slow and painstaking, especially since there are over 100,000 cards involved, but it does give me chance to validate inventory. Once all of that is done, I can transition us from Level 4 to Pro and completely modernize our MTG. Looking forward to it!