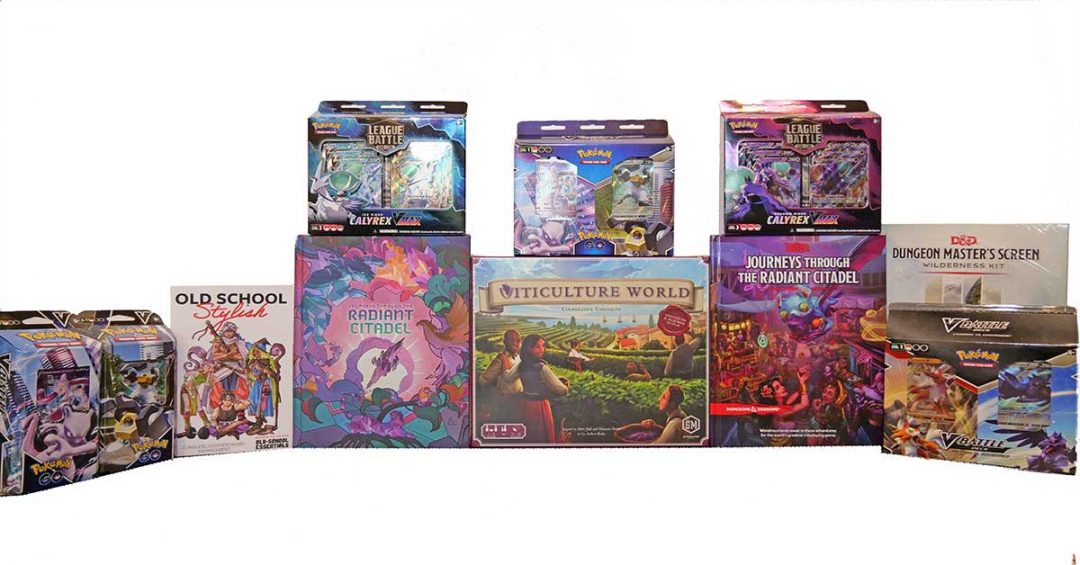 We're caught up with outbound shipments from last week's sale - what a monumental effort that was! Thanks to everyone who participated! While we were packing, our artist was busy sketching away too. That, the sales numbers and a quick lesson learned plus new items, restock and preorders. Pop in to check it out!

TALE OF THE TAPE

I'll tell you what, THAT was a busy week! Our long-time readers know that it's just Wendy and I running things from day-to-day. We get some help in a few hours here and there if things get too crazy, but for the most part it is just us. Our largest influx of orders up until now has been just over 150 in a 72-hour period. With our helpers, we were able to turn that around over the weekend with a little bleed-over into Monday. So, I expected something similar for the Summer Blowout Sale. I was...wrong.

The photo below shows you the UPS packages waiting for the pick-up on Monday. So, these were fulfilled over the weekend, and represent over 100 boxes. Combine that with what we had shipped out on Friday we were easily on track to make the 150-order estimate. However, things were much, much busier than that. 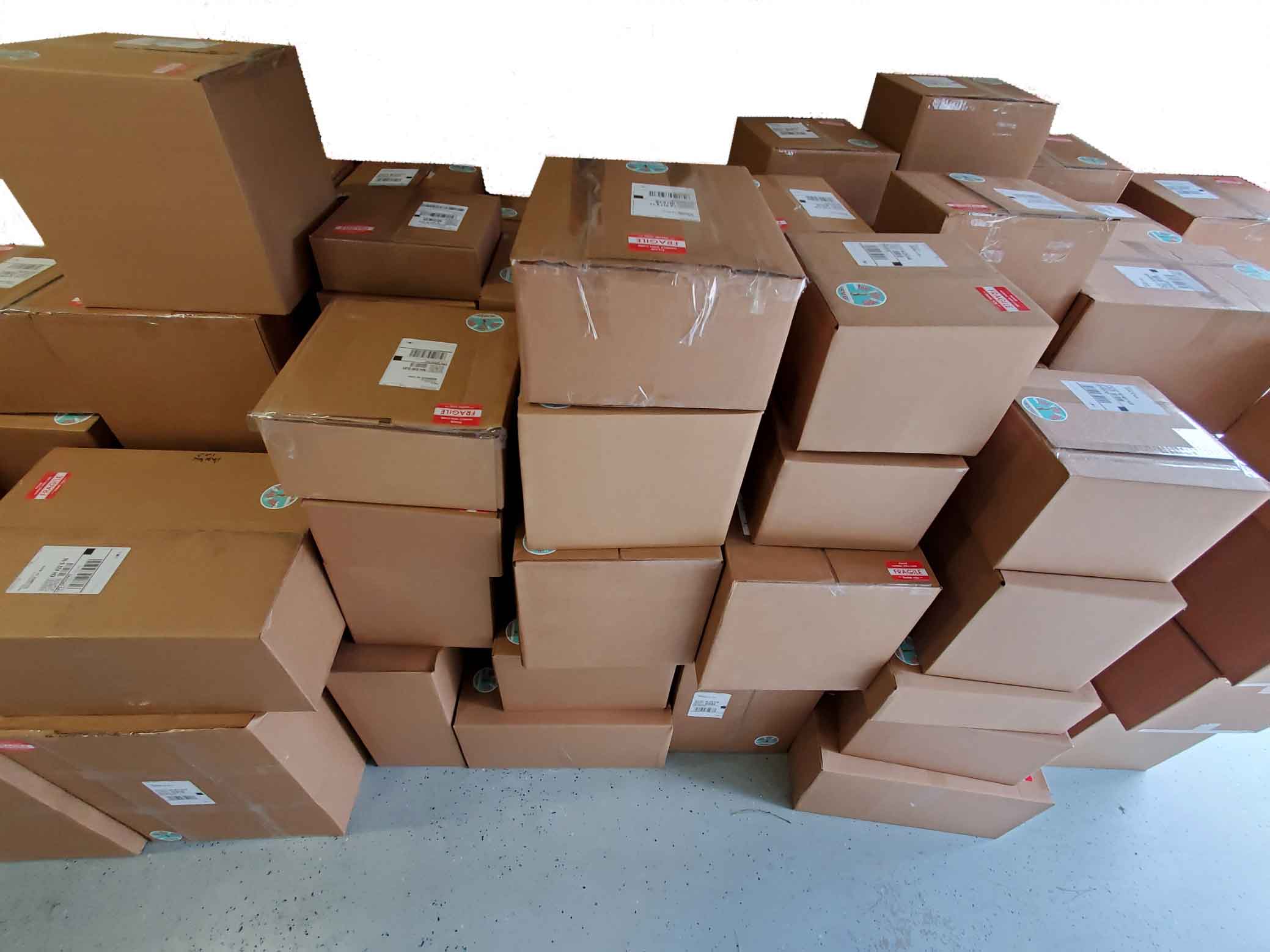 Again, because I was anticipating around 150 orders, I expected to just finish out any additional items on Monday myself. Therefore, well before the sale started, we had the helpers taking that next week off.

Amazingly, over the four-day sale period, we had over 360 orders!! That's double our largest event to date. Knock me over with a feather! So, the helpers were not able to get back to us until Wednesday (you know...plans they had already made and such) and I pushed orders Monday and Tuesday. Once we had the team together things were back to full volume, and we set the last box down in the UPS pick-up area around noon on Friday, right before UPS stopped by to pick everything up.

I want everyone to know we did our very best to make things as accurate, quick, and secure as possible. However, there were hours when fatigue set in where I or a team member might have made a mistake. After all, almost every other aspect of running the store took the back burner as we worked the orders.

Also, we did have to change up our packing methodology a bit due to the number of orders. We had to forego wrapping everything in plastic before it went into the bubble wrap, and we had to switch to packing peanuts as we quickly ran out of our regular supplies. We were able to keep up with the boxes though, we had enough on hand, which was awesome.

Now that the dust is settling here and orders are starting to arrive at front porches, I have been fielding any order or shipping issues. For the most part it looks like we might have missed a little something here and there, but reports are quite good. There is one instance of an order missing about half of its items...and I found most of the missing things under a table just yesterday. Looks like we had half of the order, got distracted, and then packed what was on the table. Other than that, as long as UPS didn't drop-kick the box to the customer, things turned out exceptionally well. We are tired, but very happy. Thanks everyone for jumping in on our Summer Blowout Sale and like one customer told me just this morning, it was like Christmas in July. Which...is exactly what we were going for.

BACK TO THE PANGEA

In our continuing art series exploring the different sections of the Stone Valley Pangea, we find ourselves in the northern mountain region. Here, over 6,000 years ago, the humans migrated to this region. Over that time, they have slowly mutated to correspond with living in the mountains. They have grown shorter, developed enhanced night vision, became stouter, and are much stronger than they appear.

Below you can see the current iteration of the art piece as our intrepid heroes risk an excursion out of the vast tunnel systems to secure the always harried trade routes to other parts of the Pangea. While the regions always seem to be at war, trade goods still flow as there are minerals and supplies the rest of the Pangea needs which are only found in these northern mountains. 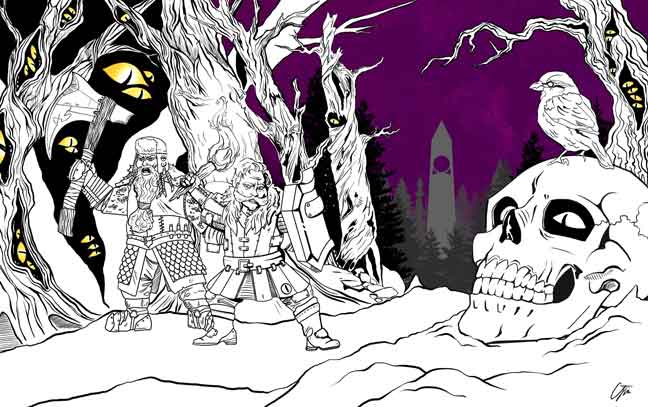 This is very close to being finished now, with the hardest part in line drawing mostly finished, and I expect it might be done as soon as next week. It's looking very, very cool!

A STITCH IN TIME

I've now had a few minutes to reflect on the sale and am going to be making two changes for future events. First, I am not going to pre-position the list of items before the sale launches. Yes...I can almost hear the 'boo's' from folks. Here's the deal. By having that list ready, dozens of customers had their orders pre-positioned and were sending them in as the sale kicked off. The system became confused and often let the orders go thru regardless of item quantity. That not only caused some orders to go thru with no actual inventory remaining, but it caused other orders to blank an item right before it could be processed which forced an order cancellation. By not having the list pre-positioned, customers will have to find and add their items before submitting, which should give the system enough time to catch up between orders. That's the way we had done it in the past and we didn't experience the double-count or cancelled orders like this time around.

The second is the number of items on sale. As you most likely noticed, a lot of those weren't just sale prices, but liquidation prices. Of the over 900 items with special pricing, over half were at 50% or greater discount. We're going to limit that going forward. I think two big sales a year combined with two or three smaller sales will help distribute the goodness. In that way we can still get some great events going, but we don't impact our regular work hours so significantly.

Hopefully those two changes, along with the one I already implemented where the website will grow with increased usage, will help make future sales events that much smoother. One thing I know for sure, we'll continue to live and learn!

Our artist stopped by to check on the next few projects. As always, we're going to be sharing them with you as they are developed. In that conversation they noted how much better they were getting at certain aspects of the work, line detail vs. color and other things that really didn't make much sense to me. Hey...that's why I had to hire an artist. You've seen my logos... I'm good at a lot of things, but not everything 😀

He did mention that he wanted to revisit some older things, and wanted to start with what we call the Stone Valley Games 'Closed Eye' Dragon. Below you can see the updated version on top and the original version underneath: 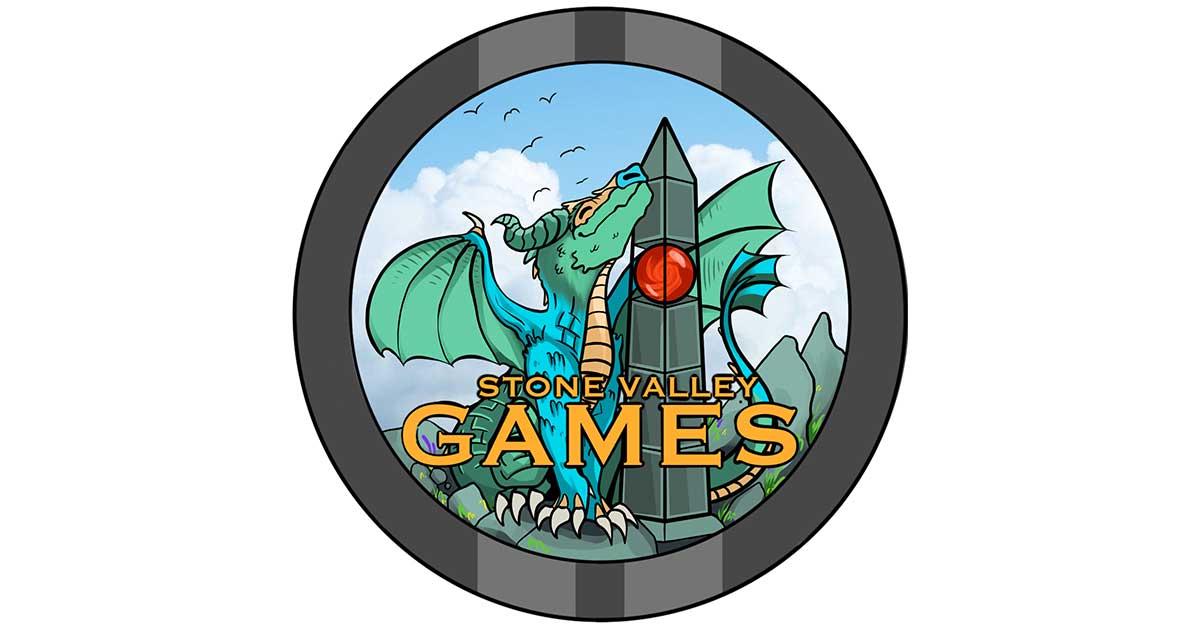 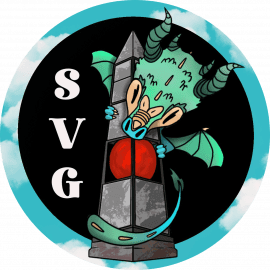 So, I have to agree, he is becoming an even better artist with all the practice we've been giving him lately. There might be a few more tweaks to it, but this is about done. Once it is finished, I'm sure it will find itself on stickers and magnets, and maybe a t-shirt.

Oh! Talking about t-shirts. Several customers have asked us to develop and stock some t-shirts based on our store logo designs. I had been doing some price checks, but decently made t-shirts are really expensive. You know, the kind of t-shirt that's soft, durable and nice. Our costs are right around $15 ea., which would mean we'd have to sell them around $22. I don't know if anyone would buy a t-shirt from us for $22. So, I'm still kicking that concept around, but just wanted you to know I have been working on it.

Okay, enough news for this week! Below are the Restocks, New Items, and Preorders added to the shop last week. We weren't able to get to them until we had all the orders completed, but we had enough time to get them in before this newsletter needed to go out. In the categories below, you can click on the item to learn more, and many of the products have review and gameplay videos so you can see the game in action. If you're visiting our page and you'd like to keep up with our giveaways, sales, new products, and articles like this one just create an account here. Once created you will be subscribed to our newsletter and become enrolled in our loyalty system, instantly earning 50 Stones that you can use on your very first order. A Stone? One Stone is equivalent to One Cent. That doesn't sound like much, but you earn 2 Stones for every dollar spent and 5 for each product review, so though it may seem small, those savings add up fast! Redeem your Stones upon checkout, and they can save you up to 10% off your cart total. Loyalty Matters!

View cart “Dungeons and Dragons RPG: Strixhaven – Curriculum of Chaos” has been added to your cart.