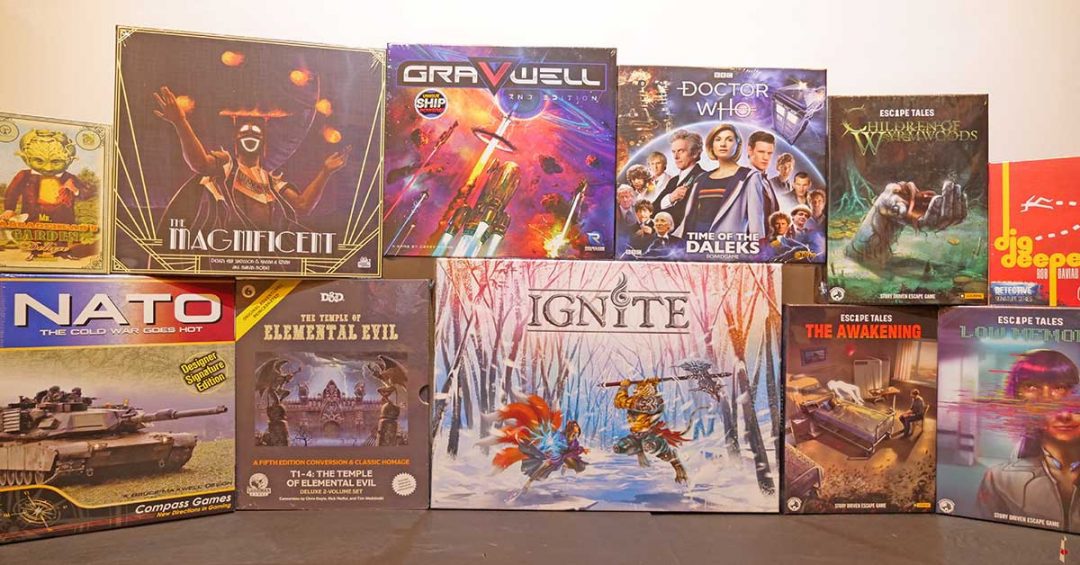 Just like that, it's Fall. Not skipping a beat, the morning temps dropped like 20 degrees here overnight. It won't hold long, but what a difference! While the weather might be unpredictably cold, the board games are running hot! We've loaded up a slew of new releases on the shelves and filled in several restocks as well. There's a bit of news too, so why don't you check us out?

I don't know about you, but Fall is our favorite season. The long hot days fade and soon even the time will be back to normal. Like really, give me back my hour of sleep! Greetings, I'm Eric, and my wonderful Wendy and I run Stone Valley Games. Though on some days it may run us... In any case we hope our weekly update finds you healthy and happy! If you're new to the newsletter this top portion contains our shop and game news and down at the bottom of the post you'll find the restocks, new items, and preorders we laid in last week. First though, the news!

We're about a week out from announcing our next monthly game giveaway. While we've done numerous giveaways in the past years, this year we wanted to give something away every month. Though we missed a month or two along the way, we made up for it by donating to other giveaways to make up the difference. Why giveaways? It's a great way for us to not only get people talking about the store and the games, but it provides us an opportunity give something back to the community that takes care of us.

We have already selected the games, and for October we're going to be giving away Four Games! It'll be: the spiritual successor to Escape the Dark Tower with the perfectly somber and futuristic Escape the Dark Sector. Also, a recent release The Night Cage that's steeped in creepiness as the maze changes whenever the light vanishes. Then, we have to include the obligatory Zombies, and the game we're going with is the recently released and wildly fun miniatures game Zombicide: 2nd Edition. Finally, it's a game I'm sure you've probably never heard of, Shardhunters, a nice little trick taking card game that channels a gloomy version of 17th Century Europe with plenty of classic monsters about. That's four games with a scary subgenre to go along with Halloween, and this giveaway is valued at over $200...how awesome is that?! We'll be opening up the giveaway on our about next Friday, and we'll have all the details in next week's newsletter too - so keep an eye out!

SILVER BELLS HANGING ON A STRING

Remember the song about Chuck Berry's cute little toy? Well, if you don't know what I'm talking about you should google it for a chuckle or two. What am I prattling on about? Toys of course! We have loaded up our very first toy (though it isn't silver bells hanging on a string), and I had to adjust the webstore front page to make room for the new category, nestled in between 'Supplies' and 'Contact Us'. While adding a category is exciting, it's a very lonely category right now with just a single toy in there!

Quick story. When I saw those Hot Wheels Star Wars Starships pop up in our distributors' release page I realized they not only looked like detailed and fully painted miniatures, but they also had the durability of diecast metal, so figured they'd be a great add. I think they look great!

Now, I don't know how many toys we will eventually carry, but pop culture toys were always in the plans. Why wait so long to add them? To be quite honest, I anticipated there to be much more time to delve into other areas - like toys, well before now. However, besides normal shop operations, the sheer output of games over the last several years has kept us fully engaged. I mean, you can go back in our newsletter for months and months, and I don't think we've had more than one week where we didn't load in new games...which is kind of phenomenal if you think about it. That's hundreds of games a year for us - and we generally carry games solo player friendly, so we're really only loading up a portion of all the new releases coming out. Mind boggling.

Of course, more games means more eventual restocks too - so all of that logistics just keeps on stretching seemingly to infinity. Don't get me wrong, I absolutely love it! However, considering we're also keeping up with the insane Magic the Gathering release patterns this year (whenever our distributors can actually get us the cards on time...), finding time to take on much else has kind of dropped away. I will tell you, I am much happier being busy than bored! So, there's toys in the shop, and it's definitely time to play! I'll be back in a second...

In a continuation of the steady drumbeat this year, we have another publisher announcing a price increase. This time around it's Fantasy Flight, and is fairly significant. Everything switches very soon, on 1 October, and impacts almost their entire catalog. There are simply too many to list, but I can give you some general ideas.

So, if you have been holding out for one of those wonderful Fantasy Flight titles you may want to jump on it now. Again, we will have to roll in the price increases on 1 October.